No review available – click on image to view programme. 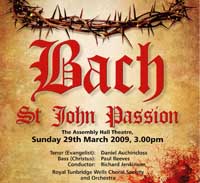 When the Royal Tunbridge Wells Choral Society, under their conductor Richard Jenkinson, presented the “St John Passion”, they were supported by a group of gifted local instrumentalists led by Jane Gomm and a team of outstanding, well-matched soloists.

The part of the Evangelist, on whom, the burden of the full narrative rests, was impressively sung by the Canadian tenor Daniel Auchinloss, while that of the Christus was beautifully delivered by the bass Paul Reeves, whose voice, warmly toned and resonant, filled the Assembly Hall without apparent effort.

Other crucial roles were taken by the countertenor, Jake Arditti, the tenor, Peter Davoren, the baritone Andrew Finden and an attractive newcomer, soprano Ellie Laugharne, who is currently studying with John Evans at the Guildhall School of Music and Drama.

To meet the devotional requirements of orthodox Lutherism the Passion oratorio, or ‘sacred opera’ as it has aptly been described, follows closely the text of a chosen gospel, but adds commentary from a chorus to illuminate the drama in various ways. The chorus moves the action forward at crucial points as, for example, the crowd’s rejection of Christ in favour of Barrabas, or the legalistic taunting of Pontius Pilate who, I have long thought, is one of the real heroes of the Crucifixion drama.

Above all, there are the chorales which, in the works of Johann Sebastian Bach, are frequently to be found, set in extremely expressive four-part writing. Protestant counterpoint they may well be, as Sir Thomas Beecham once complained, but these tranquil and largely contemplative passages were very well-handled by Richard Jenkinson and his choir and added much to our enjoyment of their performance as a whole. As evidence of this, the great final chorale was followed by a prolonged and eloquent silence, no less moving than the performance that had gone on before. 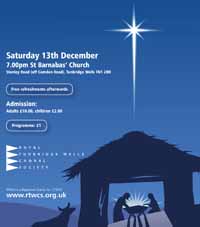 No review available – click on image to view programme.

Note that the advertised tenor solist, Philip Borge, was indisposed, and George Clifford stood in for him. The organ solo was also omitted from the programme.

The massed choirs of the Royal Tunbridge Wells and East Grinstead Choral Societies, appropriately dressed in black and wearing poppies, combined on Remembrance Sunday in a performance of Verdi’s magnificent Requiem. The Assembly Hall setting in Tunbridge Wells was somewhat different to that of Milan Cathedral where the work was given its first performance in 1847 following the death of Italy’s greatest poet, Alessandro Manzoni, a man greatly revered by Verdi.

The marvel of occasions such as this is that the whole performance is assembled in just one morning on the day of the concert when the orchestra and soloists rehearse with the choirs. Considering the length of the Requiem that is some achievement in itself!

The conductor, Richard Jenkinson, is to be congratulated on bringing together his different forces to produce a compelling and convincing performance. Particularly evident was the care that had clearly been taking in preparing the voices. In their unaccompanied sections (the Requiem aeternam from the Libera me) the pitch held up well as the choirs accompanied the solo soprano as she eventually sailed up to her top B flat – an exquisite moment in the Requiem. Similarly the voices had to be – and were – completely unanimous in the delivery of the declamatory words Libera me.“ the subterranean thumps of the massive Verdi drum helped to focus the mind ”

It was very evident that singers and instrumentalists were enjoying themselves (if enjoying is the right word) in the frequent appearances of the Dies irae, dies illa. The punctuating chords of the orchestra, the descending runs in the strings, the sharply contrasting dynamics and, above (or below) all, the subterranean thumps of the massive Verdi drum helped to focus the mind on the words Quantus futurus tremor est. Indeed this was the sort of sound that is felt – literally – as well as heard! You did not need to understand Latin to get the drift of this music!

The original performance consisted of a choir of 120 and an orchestra of 110. For this performance the odds were, numerically at least, much more in favour of the voices though there were times when the orchestra tended to play with great enthusiasm. None the less the appearance of the eight trumpets for the Tuba mirum, four in the orchestra and four in the balcony, was a dramatic moment. It was very difficult for the basses to project their sound forward into the auditorium given their position at the back of the stage and this tended to make the tenors, the smallest section of the choir but placed at the front, more prominent. It must be very difficult to deal with this given the layout of the hall, short of providing more amplification for targeted sections of the choir.

Of the soloists, particularly outstanding was Catherine King, mezzo soprano, whose voice was rich and full and covered a wide range. The soprano, Sandra Ford, came into her own in the second part of the mass. She floated effortlessly up to her symbolic top C for the words Libera me. Joseph Cornwell, tenor, was indisposed and was replaced by Andrew Mackenzie-Wicks who was at his most compelling in those sections where a lighter tone was required (Hostias) rather than in the full-bloodied climaxes that Verdi so often wrote for his operatic tenor heroes. Martin Robson, bass, drew out the contrasting emotions in movements such as the Confutatis while all four combined at different times to produce pleasing balanced ensembles.

The effectiveness of the performance, its communication of the words of the Requiem, could be judged by the prolonged and enthusiastic response of the large audience. Congratulations to all – orchestra, both choral societies, soloists and, of course, the conductor, whose hard work and endeavour produced such a memorable concert.