This afternoon, the RTWCS surpassed itself in treating the audience to a wonderful and moving rendition of Verdi’s sumptuous Requiem, his only sacred work.
Total control was established at the start from both orchestra and choir, with the pianissimo “Requiem and Kyrie” movement, followed by excellent choral intonation in the a capella section. Both choir and soloists then produced a marvellous ensemble, voices complementing each other throughout.
The terrifying “Dies Irae” was performed with commitment and vitality, clearly evoking the devastating Last Judgment; the forte dynamic was achieved effectively, but never too much. This journey of the dark night of the soul was expressed with great effect and power.
“Salva Me” was utterly intoxicating, with chorus plus soloists capturing the heart of Verdi’s Romanticism with its luscious, rich harmonies and use of rubato and gradation of tone.
All performers involved had total admiration for this operatic, powerful and emotional work, hence each movement was performed with great sensitivity and emotional involvement. The final “Dies Irae/Libera Me” was as effective as that at the beginning, the soprano soloist adding to the pathos, with beautiful chromaticism and fugal entries carefully sung by the choir.
The society was fortunate to be joined by four outstanding soloists who all sang with compassion; their ensembles were superbly executed, tightly held together and well-balanced. Helen Bailey’s clear soprano flowed effortlessly over the orchestra and choir, mezzo-soprano Felicity Buckland produced a rich, warm sound, Jonathan Cooke used his fine tenor voice to excellent effect and Louis Hurst was a vibrant and empathetic bass.
Conductor Robyn Sevastos led choir, soloists and orchestra with her usual modest authority, ever in command but allowing enjoyment of the music to prevail. She extracted every melodic and harmonic nuance out of the requiem, with all voice parts evenly balanced. It is obvious that she is a popular and successful musical director, and it is a credit to her that the choir has worked very hard to produce a concert of this high quality.
A special mention must go to the RTWCS orchestra and its leader Andrew Laing, who accompanied the society so well this afternoon, and to rehearsal pianist Craig Hudson.
Finally, how delightful it was to see younger members of both choir and audience. Long may this continue!
Congratulations to all concerned on an outstanding concert, or in the words quoted by the tenor soloist in the programme, there was certainly “plenty of drama, passion and transcendence!”
Michele Roszak 10th April 2022 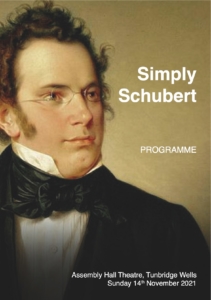 It was a joy to see the return of the RTWCS after nearly two years, this time performing a programme entitled “Simply Schubert”. The audience was treated to a delightful assortment of choral works and songs, or Lieder, by Franz Schubert.

Conductor Robyn Sevastos introduced the choir, orchestra and soloists, before the Mass in G, no. 2 commenced with the Kyrie and its gently undulating stylistic vocal lines, employing successful gradation of tone. The Gloria section was firmly attacked and handled with appropriate rhythmic energy; the Credo executed with great care and attention to detail, while the short fugal section in the Sanctus was performed skilfully and effectively. The Benedictus was a trio for today’s fine soloists, whose voices blended excellently, before the choir’s sudden entry on “Osanna” lead into the moving Agnus Dei, with its pleading message between soloists and chorus alike.

We were next treated to some of Schubert’s best-known Lieder: Auf dem Wasser zu Singen, with its constant quaver movement for both voice and piano accompaniment, and Auf der Donau, both superbly executed by mezzo-soprano Sophie Kidwell. She presented us with a warm and clear tone, and subtle detail to emotion.

Ruairi Bowen (tenor) sang Ganymed and Du bist die Ruh, both of which he performed with an excellent sensitive awareness to the text plus good use of dynamic shaping and a bright, forward vocal tone.

The setting of the next choral piece, “Tantum Ergo”, caught the ideal atmosphere of a Medieval hymn, with dialogue between soloists performing in harmony and the full chorus, akin to tutti and ripieno sections.

Baritone Robbie Haylett gave us renditions of Nachtviolen and Ständchen, tenderly and sympathetically presented, and with excellent diction.

The fourth soloist, Kristy Swift, sang the trio Der Hirt auf dem Felsen with a charming clarinet obbligato played by Michelle Andrews; her obvious love of this song and its hope for the coming Spring shone through in her bright, effortless soprano voice.

Craig Hudson accompanied the Lieder with consideration and sensibility, never allowing us to forget that he was in total equal partnership with each singer.

The concert’s grand finale, the Magnificat, was executed to great effect by choir and soloists alike. All three sections were cleanly defined; the second one of soloists, woodwind and strings was particularly moving; in the final Gloria, all performers made use of every musical idiom available in order to bring a most enjoyable afternoon to a conclusion.

Robyn Sevastos was totally in control of both choir and orchestra throughout; choral entries were prompt, tuning and balance of voices excellent, and Schubertian emotions were well expressed and never undermined. The choral singing revealed clear part singing and a lucid, forward tone. Andy Laing led the orchestra with precision and sensitivity to both choir and soloists.

It was good to see everyone performing off the stage; a very effective tool in bringing all the sections together. This helped to encourage the balance of sound which was so successful this afternoon.

Congratulations to all involved! Michele Roszak