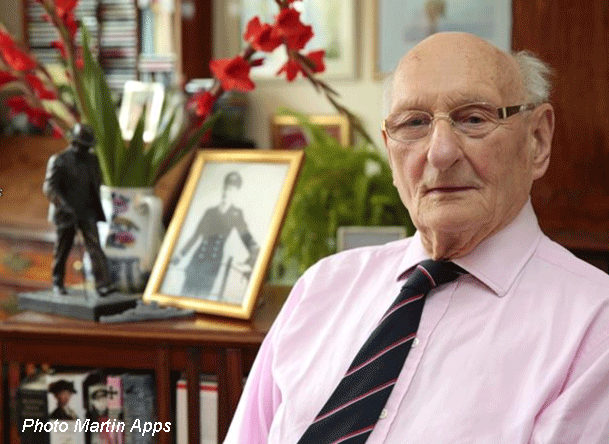 Sadly our President, Guy Huntrods, died on 17th September 2017 after a short illness. He was greatly loved by everyone in the Choir and he will be much missed not least for his infectious enthusiasm and abundant good humour. His funeral was held on Friday October 20th in St John’s Church, Tunbridge Wells.

Guy was appointed President in 2016 in acknowledgment of his unswerving loyalty and enthusiastic support of the society over many years. Guy was born in Cumberland (now Cumbria) in May 1923 but has lived in the Tunbridge Wells area, with spells abroad, since 1937. His first job was for a year as the Junior (“the lowest form of animal life” as he puts it) in Lloyds Bank on Mount Pleasant. In a quirk of fate he was, 38 years later and after many vicissitudes, to become the Executive Director of Lloyds Bank International, responsible for that Bank’s extensive network of branches and business throughout Latin America.

Meanwhile, on his 18th birthday – having served in The Home Guard – he volunteered as an Ordinary Seaman in the wartime Royal Navy where he attained the rank of Lieutenant, and was at sea in all the main theatres of war including Normandy on D-Day.

After demobilisation in late 1946 he joined the Bank of England – again in a very junior capacity rising to become an Advisor – before moving into the private banking sector in 1973 and finally back to Lloyds Bank.

During his time as a Bank of England Official Guy filled many senior roles overseas including that of UK Alternate Executive Director of the International Monetary Fund in Washington DC from 1967 to 1970, a rôle right at the sharp end of the 1967 devaluation of the Pound Sterling. Prior to that he had spent a year in Rio de Janeiro as an Advisor to the Government of Brazil, which later appointed him a Commander of the Order of the Southern Cross. In 1985, in the Civil Division of the Queen’s Birthday honours, Guy was listed as being awarded the CBE for his services to international banking.

After his retirement in 1985 Guy pursued many new interests amongst which two predominate.

Chartwell – the former home of his hero Winston Churchill – where he was well known as an enthusiastic and knowledgeable Volunteer Guide and Room Steward.

And, of course, The Royal Tunbridge Wells Choral Society which he joined, with no previous singing experience, 25 years ago having just started to learn the piano from scratch. Until very recently Guy sang in the Tenor Section and always brought huge enthusiasm, energy and dedication to all our activities including serving for a time on the Executive Committee and until recently as Vice Chairman. Guy always said that choral singing had brought him immeasurable pleasure, challenges and friendships that had greatly enriched his retirement years.