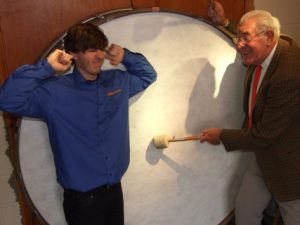 The massed choirs of the Royal Tunbridge Wells Choral Society and the East Grinstead Choral Society, the RTWCS Orchestra and top soloists will perform the Verdi Requiem at the Assembly Hall Theatre

Here trying out the drum is Roy Dunstall, the chairman of the RTW Choral Society, at the West London home of the drum, Bell Percussion, with his ‘test subject’, Bell expert Mark Evans!

Published in the Courier –  November 2008