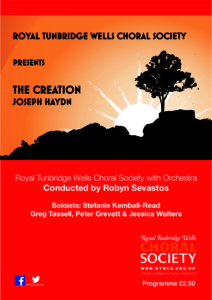 The Royal Tunbridge Wells Choral Society’s concert this afternoon of Haydn’s oratorio “The Creation” was dedicated to the memory of the Society’s late conductor, Derek Watmough, a highly influential and inspirational musician with immense expertise and a great supporter of the arts in Kent.

On this occasion, there were two variants from the usual formation of choir and orchestra; the choir performed not on the stage but on the same level as the orchestra, and the four SATB voice types were mingled together, creating a more rounded balance of sound.

The orchestra began the work gently and sensitively under the baton of conductor Robyn Sevastos, evoking universal chaos, followed by equally expressive entries from the baritone soloist and the chorus, and culminating in the forte C major chord on the word “light”. This is a very charming oratorio, encompassing some beautiful melodic and harmonic writing in true Haydn style. It flows effortlessly through arias, recitatives and choruses, all directed to please and entertain the listener; today the RTWCS and orchestra did it much justice.

The choir performed with a flowing musicality and ease, singing each chorus with clear, lucid vocal lines, whether block harmonies, fugal entries, suspensions or polyphony – all voice parts were well represented, and the novel idea of mixing voices must be applauded. Neat phrasing, fine tuning, and use of dynamic shading were very much in evidence throughout.

The relationship between chorus and orchestra was excellently balanced, with descriptive word painting from the latter supporting the former.

It is easy to see why the soprano soloist Stefanie Kemball-Read finds “The Creation” one of her favourite works – she sang with vocal dexterity and beautiful tone quality as well as exemplary diction. Bass soloist Peter Grevatt displayed a lovely warm tone and much sensitivity to the mood of the piece, although an occasional lack of focus affected the clarity of vocal runs. Tenor Greg Tassell executed every note with even tone and thoughtful phrasing, daring to explore all the dynamics. Their trios were particularly effective when accompanied by the sotto voce chorus.

Today’s concert was a great success, and particular praise must go to conductor Robyn Sevastos for her outstanding leadership. She is almost self-effacing, taking control but allowing each section to express itself. Congratulations also to orchestra leader Andy Laing, choir soloist Jessica Walters and rehearsal accompanist Craig Hudson.

In the words of retired secretary Helen MacNab, Derek was known for his “knowledge, enthusiasm, encouragement and unstinting energy – he loved us, and we loved him”. Today everybody loved the performance of “The Creation” of which Derek would have been so proud. Well done to everybody involved!