RTWCS’s production of Haydn’s creation was very enjoyable. The swashbuckling Rebecca Miller led from the front giving everyone clear and expressive direction – listening at all times, and directing with a wide range of flowing movement, reflecting the music as if in a dance.  Were the orchestra slightly reluctant to follow? No – the cause was the music restlessly searching for somewhere to settle down, matching the words ‘the earth was without form and void’.  At the words ‘let there be light’ a great C major chord fired the starting gun and we were off on a tour of seascapes, brilliant sunrises, limpid brooks, pastoral scenes with lambs bleating, animal spotting, dreary wasteful hail, snow and the heavens – all with their own music to reflect the images called to mind by the words.

The balance of the chorus (which outnumbered everyone else), the band and the soloists was splendid: everything could be heard clearly. And what soloists they were – all of them highly qualified and a delight to hear, both separately and ensemble. How we wanted to clap at the end of each section – each had a big finish and it seemed a crime not to applaud – however the chance was taken at the interval (and of course the end).

Some other special moments: at one point the soprano held up her music as if offering her voice up as part of the event; and a number of times there was a clear dialogue between the soloists and the band, made possible by the space given by the conductor. 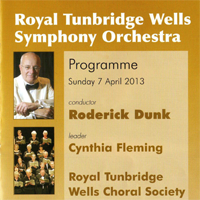 No Review available – click on image to view programme

The Spirit of England
The Music Makers
Serenade for Strings

Concert supported by the Elgar Society

The inaugural concert of a new Musical Director is an exciting affair, being particularly apt for a concert that ends with the words “You shall teach us your song’s new numbers” that introduced Rebecca Miller to the musical community in West Kent after a distinguished career in the US and London.Maestro Rebecca Miller swept all before her like a human tidal wave.

Miller guided her players through the familiar melodies of Elgar’s Serenade for Strings to open the concert. The central Larghetto was particularly expansive and heartfelt. Then, with enlarged orchestral forces and the RTWCS, she presented Elgar’s tri-partite The Spirit of England. Elgar set the poems at Sir Sidney Colvin’s bidding  ‘Why don’t you do a wonderful Requiem for the slain – something in the spirit of Binyon’s “For the Fallen” …’ which made this another apt choice for a Remembrance Sunday concert.

The RTWCS, encouraged by Miller, gave a precise and well-focused performance of the first poem, with soprano Fiona Hammacott giving the right amount of stiff-upper-lippery in Binyon’s poems. The chorus showed the audience that this piece was really about war and the pity of war. The overall tone of the choir was strong, and the phrases were well shaped, capturing well the doubt and hope, and the fighting despair in the second poem. Some individual leads in the tenors and basses lost their way over the orchestra, but the delivery was crisp and committed. Hammacott gave total commitment to the words and the sentiment behind them with a warm wide tone and great emotional intensity to the piece.

The most famous section, ‘To the fallen’ was beautifully sung by soloist and choir.A lady in the audience sitting somewhere behind me exclaimed a heartfelt “Blimey!” after theSpirit of England performance.  Miller drew out the long aching lines and flexible rhythms from her forces. The programme touchingly told of the members of the choir whose families were devastated by the First and Second World wars, so at the famous line ‘We will remember them’ the warm piano tone was particularly poignant.

‘The Music Makers’ followed after the interval. The score, looked at with a coldly critical eye, gives us moments where Elgar clearly was not visited by “the breath of (our) inspiration” of which the poem speaks. It is easy to criticise the over use of sequences and easy verbal repetition, but in such a fine and convincing performance as Rebecca Miller drew from her assembled forces, it was easy to overlook these moments.

The work is self-referential, and these moments begin about half-way through the orchestral introduction where the ‘cellos have the theme of the Enigma Variations – played with restraint and delicacy by the cello section. Again RTWCS made a telling entry for the first and lovely choral entry “We are the music makers and we are the dreamers of dreams” and over all, the choir seemed to relish this piece more so than the doubting phrases of The Spirit of England. Miller encouraged her forces to give everything on the sudden eruption, at“We fashion an empire’s glory”, and the quotation of the Marseillaise.

The RTWCS Orchestra was full bodied when it was needed, and yet could play with incredible softness, as just after the Mezzzo’s first entry. This was sung beautifully by Kate Symonds-Joy supported by the orchestra in a very moving reference to the famous “Nimrod” heard across the land in the annual service of remembrance at the Cenotaph that morning. Symonds-Joy and RTWCS carefully inter-weaved their vocal parts around this redolent of tunes, “they had no divine foreshowing of the land to which they are going, but on one man’s soul it hath broken, a light that shall not depart”.

Symonds-Joy’s full tone and lovely sense of line continued for “Yea, in spite of a dreamer who slumbers and a singer who sings no more”while the orchestra played a reference to the “Novissima hora est” phrase from the composer’s ‘Gerontius’ at the same time.– moments of sheer virtuosity and brilliance from both players and singers – the conductor (or should I say generalissima) .. was 100% communication and driving force leaving nothing to chance – totally focussed on the choral and still being able to sweep the orchestra along in the accompanying sections.
(comments by Wilmarc Ellman)

Miller’s energetic style drove her forces to a blazing intensity (con fuoco) at the section “With wonderful deathless ditties, we build up the world’s great cities” and it was clear that the Choral Society had worked hard on the articulation of of its corporate consonants. The choral sopranos and altos were for the most part full throated and warm across the range, and although the basses of the chorus lacked weight contrapuntally and the tenor’s tone was sometimes thin, the total effect was of a movingly effective performance in a notoriously difficult acoustic.

Miller has set the bar high after her first performance with RTWCS, as she paced the music beautifully and coaxed from chorus and orchestra a wide dynamic range even down to Elgar’s inclusion of the organ which rumbled along with a heavy bass at the climaxes.

The stillness of the final pianissimo close held the audience in rapt silence before earning the well deserved applause of the audience.