The first 90 years of RTWCS, from its founding late in 1904 to 1996, is documented in a book “90plus” written by Mary Standen. Mary joined the choir in 1945 and was membership secretary for most of the latter half of the 20th century.

Click here to view index of “90 Plus” with links to all sections.

Also in this section is a list of all RTWCS Concerts up to December 2000 (adapted from the list included as an Appendix in “90 plus”) – with links to Programmes, Reviews and in some cases Previews – mostly taken from the local “Courier” newspaper. Note that we currently have included only a small number of reviews covering the first 50 years, but many of the programmes from 1959 onwards are currently available and can be downloaded as “pdf” files. This section remains under development.

To view details of events in the 21st Century (2001 onwards), go to our Reviews page.

RTWCS has been performing in the Assembly Hall Tunbridge Wells since 1942.

Acknowledgments: Thanks are due to Mark Rees and Muriel Thatcher for provision of copies of the 20th century programmes. Reviews and previews are mostly copied from those published in “The Courier” – microfiched copies of which are available in Tunbridge Wells public library. Copies of more old programmes, together with old posters, photographs, and miscellaneous other material which formed the basis of Mary Standen’s book are kept in the vaults of Tunbridge Wells Museum. Thanks are due to the later Richard Gosling who donated this material to the museum, and to the current curator Ian Beavis for allowing me access to view and copy material for this website. 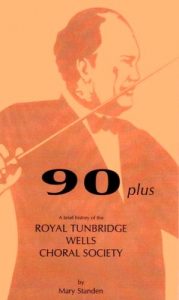